There is something about the light in Los Angeles. To quote The New Yorker article written by Lawrence Weschler, a transplant to the East Coast: "That light: the late-afternoon light of Los Angeles—golden pink off the bay through the smog and onto the palm fronds. A light I’ve found myself pining for every day of the nearly two decades since I left Southern California.” Weschler isn't alone, here in LA we live our lives around this light and most of us don't stop talking about it. Sunset pictures on instagram, tan skin, the endless summer. For our client, photographer Monica Wang, it was the love of this light that sparked the flame. Or should we say, it was the spark that created eight new skylights inside an abandoned seafood warehouse turned photostudio. 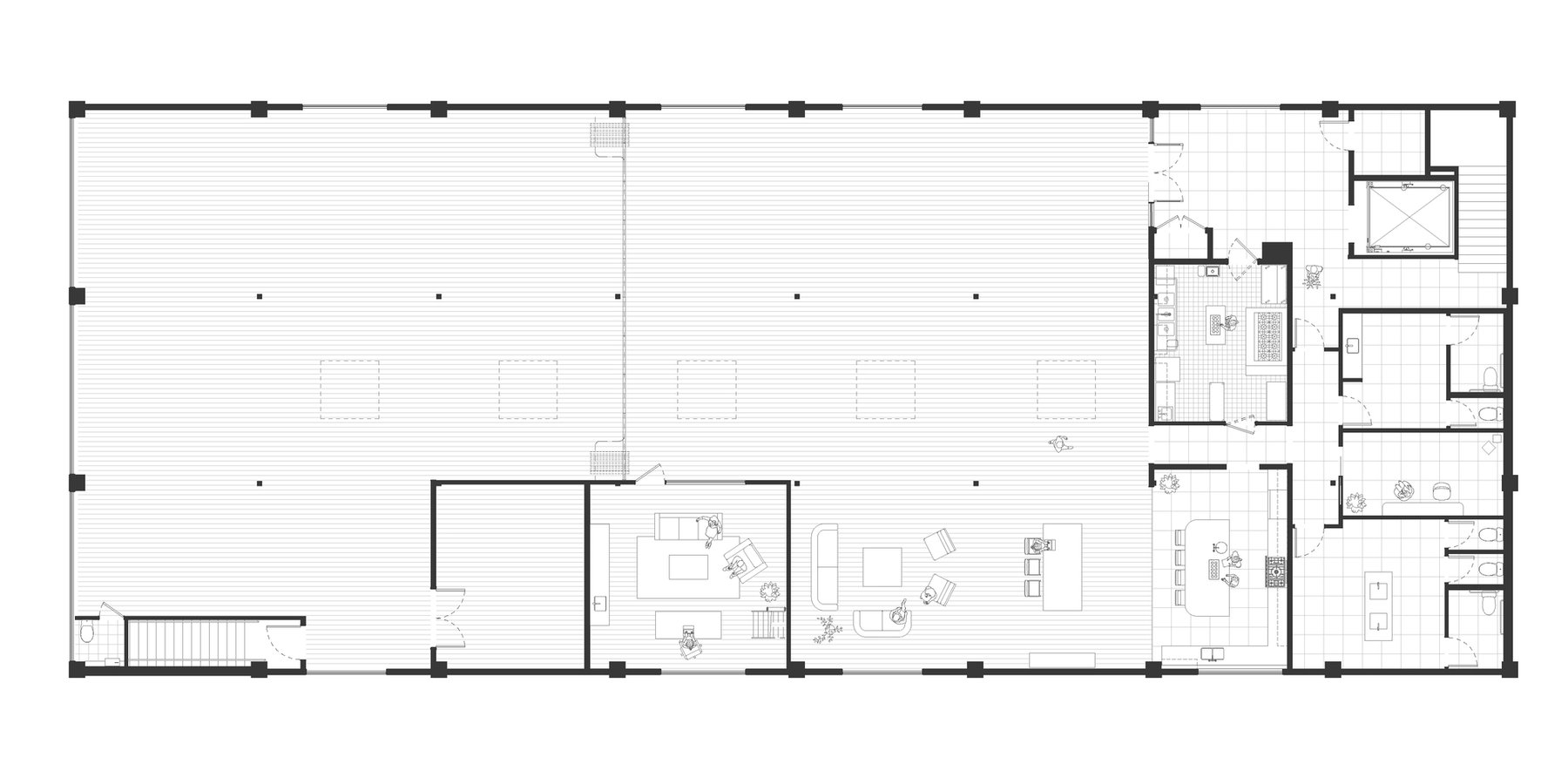 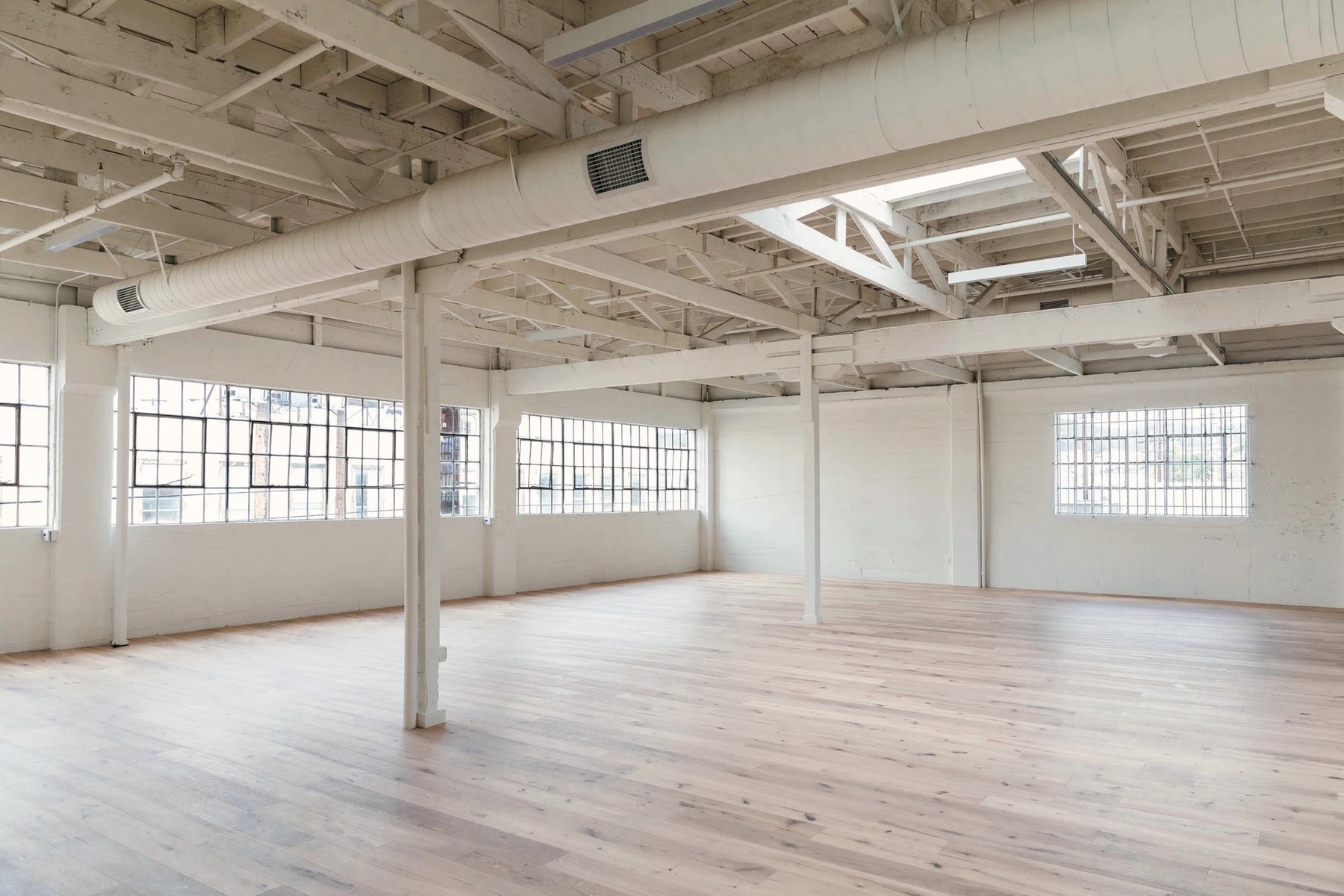 Over 4,000 s.f. of open warehouse space configured for photoshoots and events 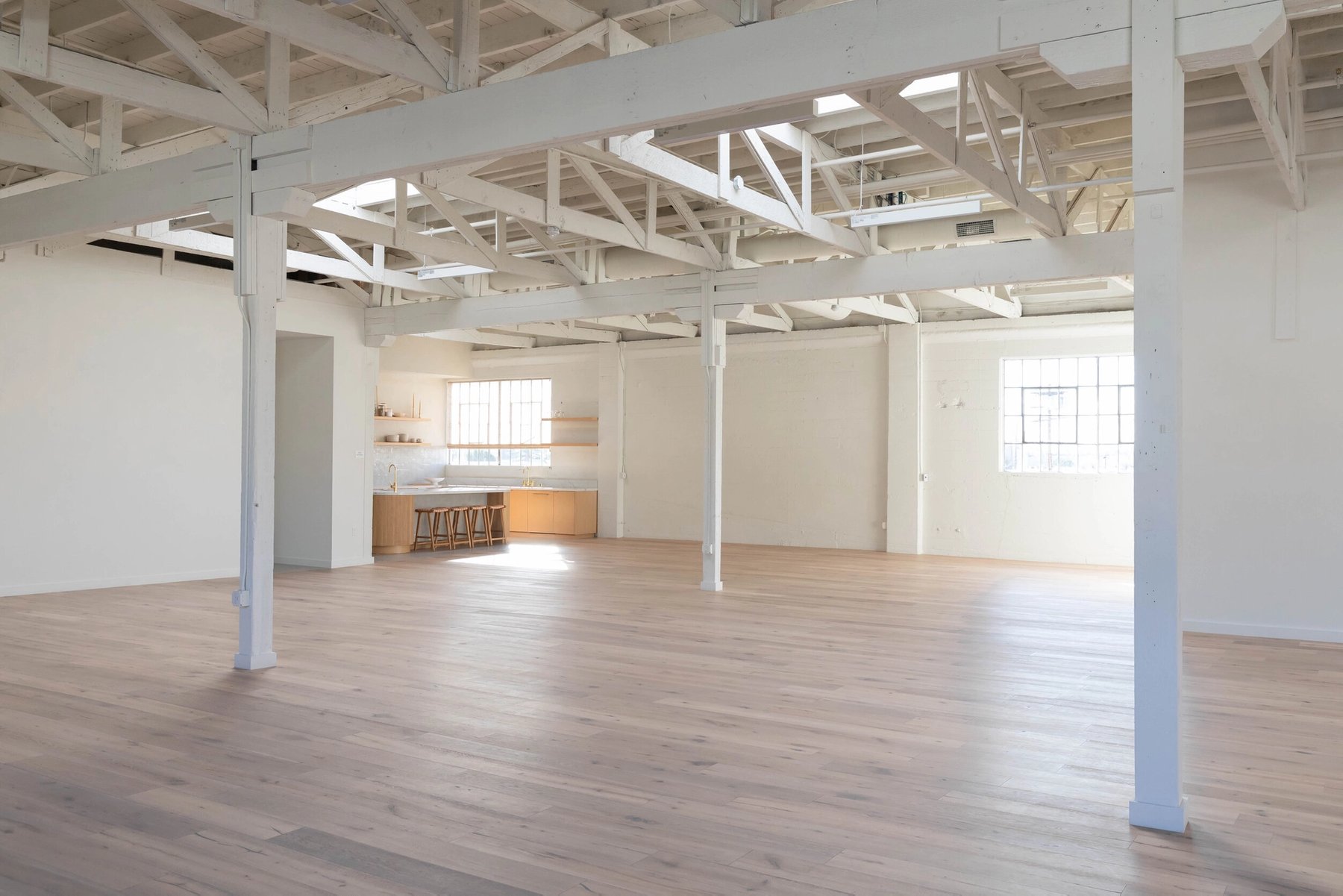 The Revery is a space tailored for creatives by creatives.

Tucked away amongst a grouping of post industrial warehouses in the northeast part of Chinatown, The Revery plays no small part in the sea change of an area set to be the next cultural incubator for the city.

The Revery positions itself as a natural light studio first and flexible event venue second.  It repurposes the industrial skeleton of what once was a seafood warehouse into a clean and bright building with touches of material elegance. The new additions are intended to bring function and purpose while allowing the inherited patina of the raw space shine.

The project was completed in two phases: the long overhaul of an entire second floor and a quick two-month sprint to refurbish a dilapidated steel storage structure into an airy veranda. The Veranda, part outdoor events space and part open-air white box for all ideas to flourish, is the perfect transitional setting for Southern California weather. White painted steel trusses fly over head creating an open and flexible space. All white, a container for light.

While the studio spaces are the functional draw to the space, the other rooms have not been spared any attention to detail.

Leading up to the second floor studios inside is a staircase clad in carefully paired stone veneers. A touch of natural elegance to hint at what sits above in the studios. The second floor is where the magic of natural light shines. Two photo studios, one intended for general scenes and the other tailored around home and lifestyles with a separate dedicated stage kitchen. Both are both naturally lit by skylights and original factory windows, providing an even constant light quality.

While the studio spaces are the functional draw to the space, the other rooms have not been spared any attention to detail. Two luxurious bathrooms and a dressing room are equipped with custom furniture, stone vanities and light fixtures by local Los Angeles based Park Studio and Atelier de Troupe. Large skylights overhead flood these rooms with natural light and some may even opt to use these as photosets as well. 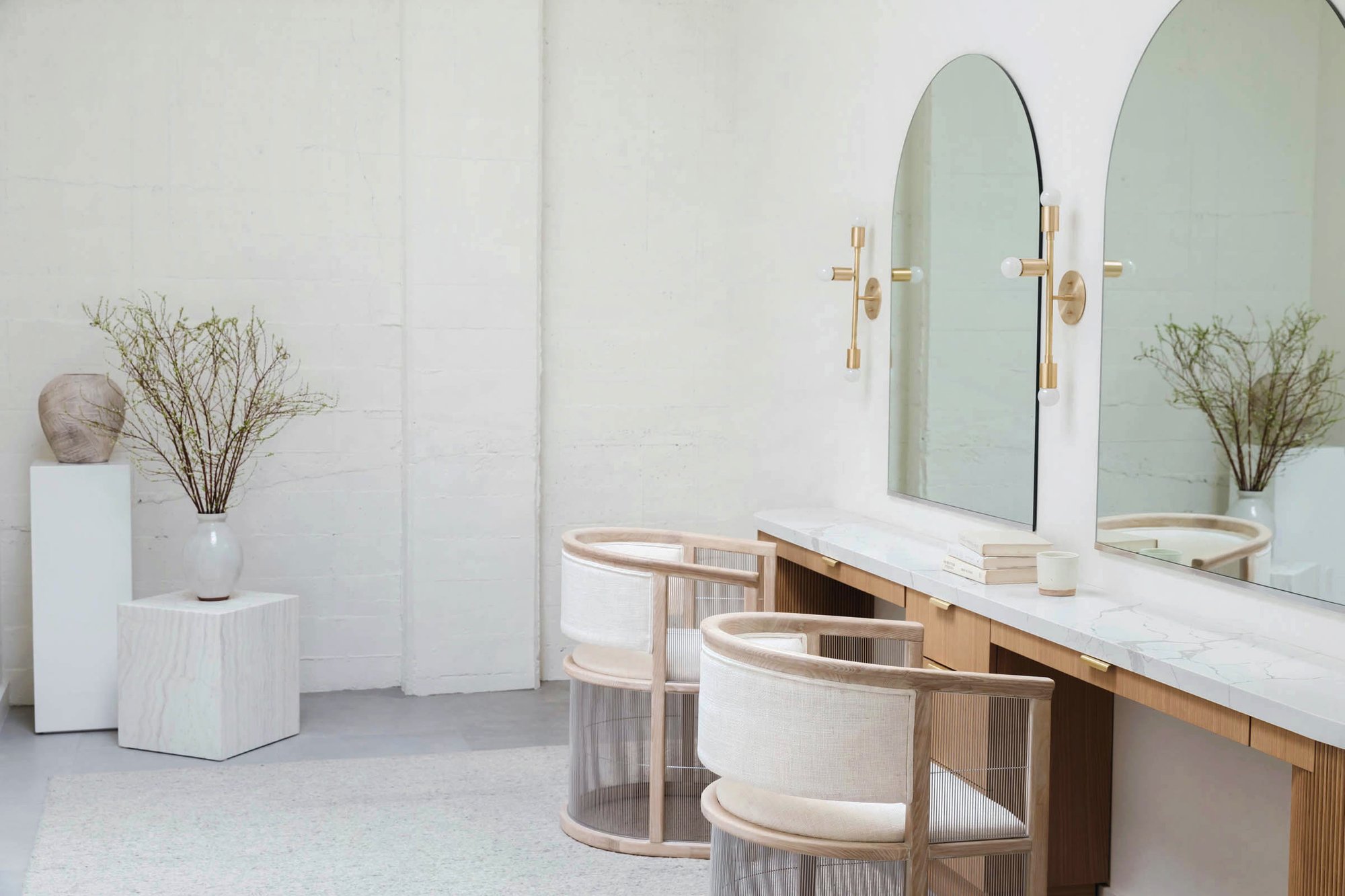 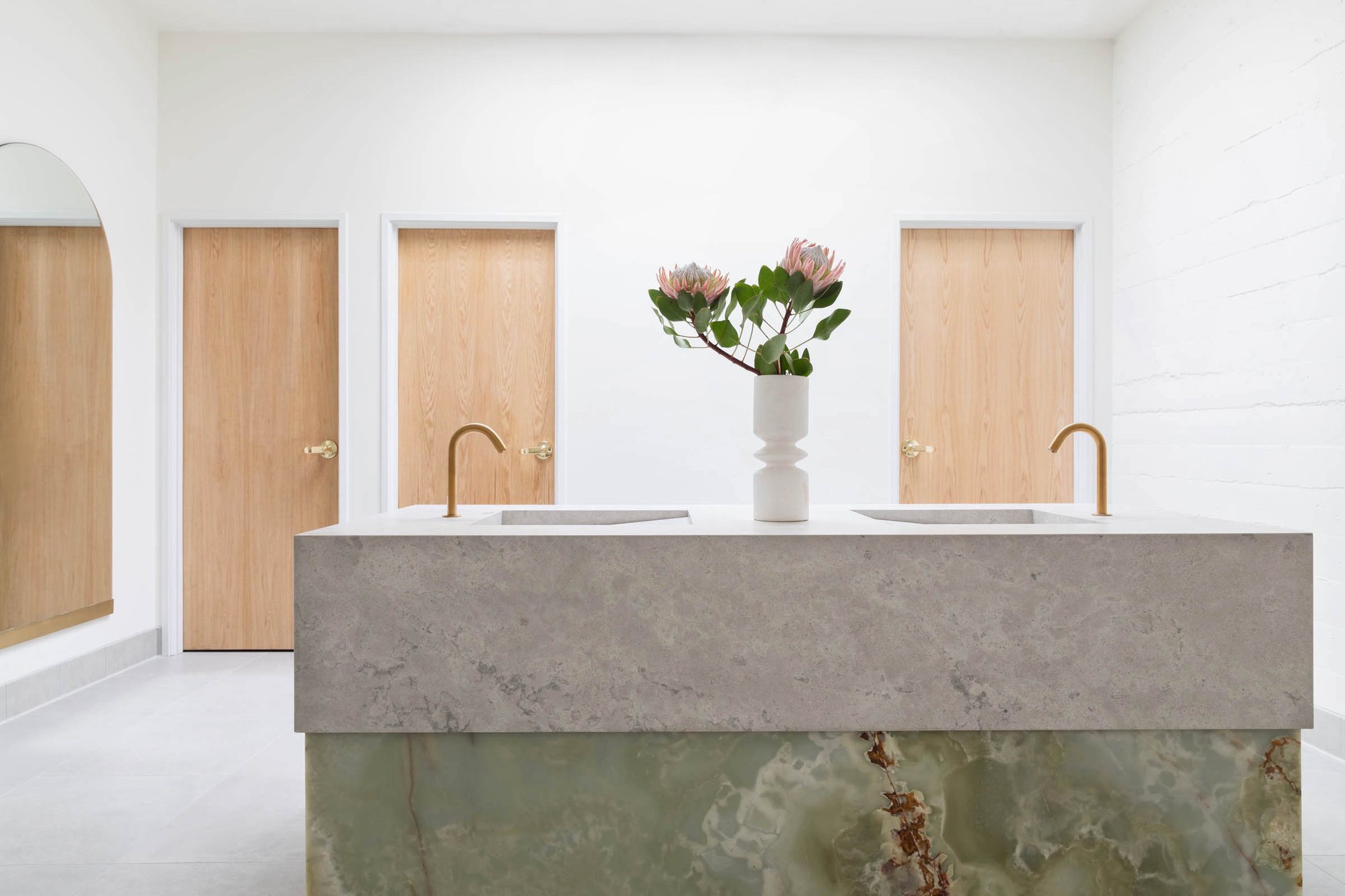 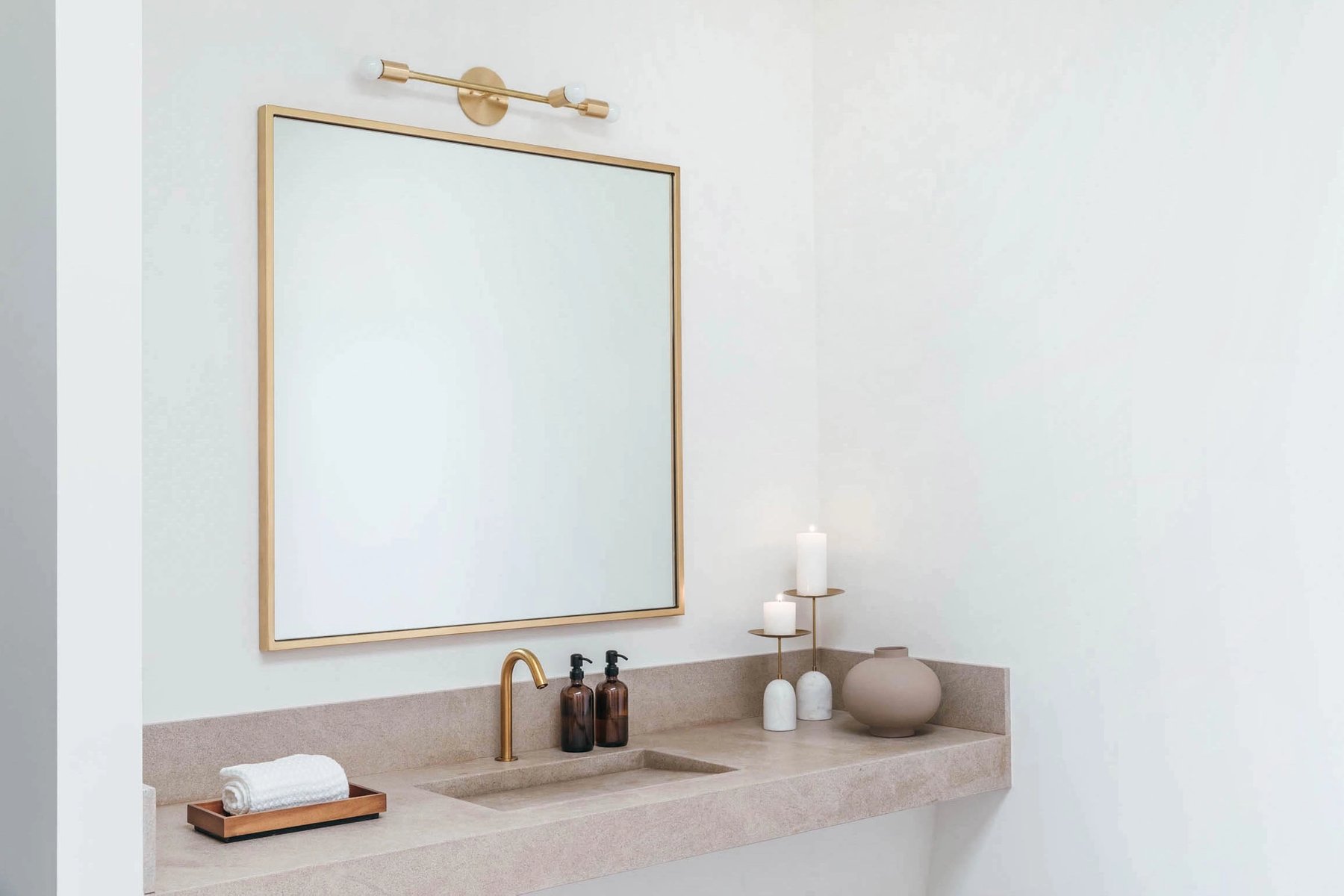